Which Chord Next? A Simple Approach to Chord Progressions

Which Chord Next? A Simple Approach to Chord Progressions.
By Paul Edwards

Planning to get a diploma in music soon? Are you checking out audio production courses and music production courses in Melbourne now? Several articles such as this one have been prepared to refresh your knowledge in music. Read on to familiarise yourself with music theory and prepare yourself for an Advanced Diploma in Music Industry available at Abbey Road Institute Melbourne.

Have you ever sat down and come up with a great sounding chord progression or riff, but then not known what to do next?  Perhaps you tried pairing two similar sounding chord progressions together to establish a Verse / Chorus in your song, but the two sections just don’t work well together.  This might leave you feeling frustrated and wondering exactly how your favourite artists compose their tracks, and if you’ll ever be able to do it yourself.

Because there are many different compositional techniques and approaches that artists use to create their tracks, in this article we will focus on the most simple technique of establishing diatonic chords (or diatonic harmony) to allow you to utilise some time tested chord progressions and start piecing your song together section by section.

Firstly we must understand Major Scales and be able to calculate all the notes contained in the 15 Major Scales present in Western Music.  The easiest way to do this is to simply refer to the Circle of Fifths as it gives us a visual snapshot of all the key signatures for each Major key (and their relative minor keys): 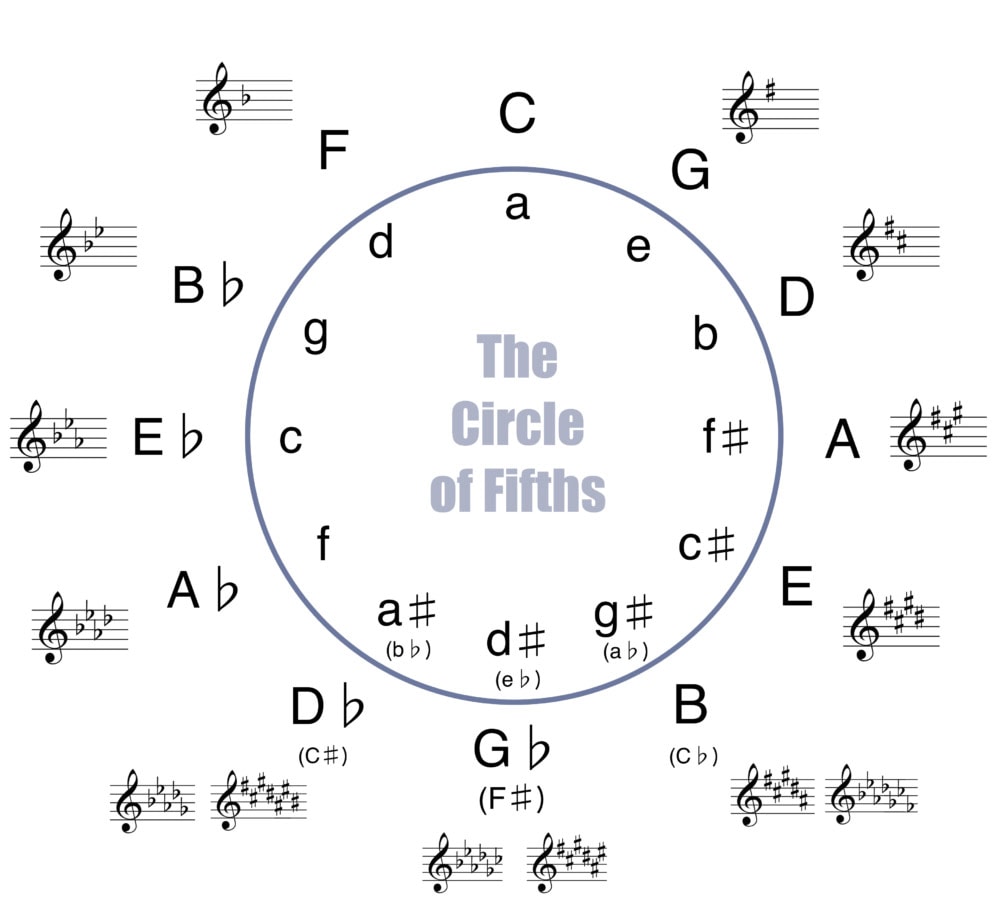 While this diagram might initially be overwhelming (particularly if you are not comfortable identifying notes on the staff), following a few simple rules and guidelines will help you uncover the great benefit that the Circle of Fifths provides musicians.

how does this work?

Say you wanted to compose a chord progression in the key of A Major. You can simply refer to the Circle of Fifths to find A Major (positioned at 3 o’clock) and see that it indicates that A Major has 3 sharps present in its Key Signature (a shorthand representation of the altered notes within that key).  Now without even being able to identify the note positions on the treble clef, I will show you a simple way to remember the ordering of all the sharps in a Key Signature.

So the ordering of sharps in a Key Signature follows the memory phrase “Father Christmas Goes Dancing After Eating Bananas”, where the first letter of each word represents the note that is being sharpened.  So if A Major has 3 sharps present, those 3 sharps are represented by the first 3 words of the memory phrase “Father Christmas Goes”.  Therefore A Major has an F♯ a C♯ and a G♯ present, meaning that all the notes in the A Major scale are:

So, if we were to now establish all the notes in the key of B Major, from the Circle of Fifths we can see that B Major has 5 sharps present.  Those 5 sharps are represented by the first 5 words of the memory phrase “Father Christmas Goes Dancing After”.  Therefore the notes contained in the B Major scale are:

Great, I’ve got sharps down, but how does it work for Flats?  The ordering of flats simply follows the Father Christmas phrase, but in reverse – i.e. “BEADGCF”.  To establish the notes in the key of A♭Major, we see the Circle of Fifths says there are 4 flats.  Therefore applying the same principle to the reverse Father Christmas phrase we can work out that those 4 flats must be “BEAD”, making the notes in A♭Major:

As everything in music theory relates back to the Major Scale, by now knowing how to establish all the notes in each Major Scale you effectively know about 80% of what is required to compose simple, stable sounding chord progressions.

Now if we were to build Triads (3 note chords) on top of each note in a Major Scale we would establish the Diatonic Chords available in the key.  Essentially, the Diatonic Triads describe the chord qualities for each chord that naturally belong in a key, and every Major Scale follows this pattern:

Therefore if we combine this pattern of chord qualities with the notes we have established in the key of A Major, we would find that the chords available to us in A Major are:

Now we are free to sequence any one of these 7 chords available to us in any order that we wish and our chord progression will maintain a sense of tonal centre as all the chords are diatonic to the key of A Major.  Better yet, we can utlise the dozens of time-tested chord progressions that artists have used throughout the ages, to come up with distinct progressions for each section of our song. A simple Google search for “Common Chord Progressions” will yield a multitude of pages describing different applications of this concept.

As an example, we can choose a 1-5-6-4 progression for our Verse. Check out Axis of Awesome’s 4-Chord Song on YouTube to see how many hit songs have been created with this progression!  Applying that to the key of A Major we would have:

And for our Chorus we may choose a 2-5-1 progression, giving us:

As all of these chords are diatonic (natural) to the key of A Major, it means each section will work together and your song will progress nicely with no harsh transitions. Above all, it will also mean that you have a strong, stable foundation for your song allowing you to easily build melodies, harmonies and instrumentation on top of these progressions. Feel free to experiment with the rhythm and timing of each chord progression, also feel free to alter some of the chord qualities to create a little more interest in your piece.

There are countless variations of this but some other common chord progressions are:

In summary, the simple theoretical approach to chord progressions requires 3 things:
1. Identify the notes contained in the Major Scale you are composing in:
a. Find number of sharps or flats present in key signature on the Circle of Fifths:
i.Sharps follows “Father Christmas Goes Dancing After Eating Bananas” phrase;
ii.Flats follows the same phrase but in reverse – “BEADGCF”
2. Apply the pattern of Diatonic Chords present in every Major Scale to determine the available chords in your chosen key:

3. Choose a common chord progression for each section, and apply the chords you have identified in your Major Scale to that progression.

And that wraps up the interesting discussion on chord progressions. If you are interested in sound engineering or music engineering, stay tuned for more articles.