With the fifteenth annual Record Store Day on April 23rd fast approaching, fans, artists and record stores around the world are gearing up to celebrate the unique culture of independently-owned record stores and their role within local communities. Vinyl album sales surpassed that of the CD for the first time in Australia last year, at $29.7 million compared to $24.9 million, as reported by the ARIA. It’s clear that the vinyl market is becoming an increasingly important segment of the music industry; a momentary escape from the digital streaming landscape and a chance to reclaim a sense of sentiment and ownership for our beloved records.

A History of Recorded Sound

Working in his Menlo Park Laboratory in 1877, Thomas Edison dreams that one day every home will have access to their own ‘talking machine’. Even his vision for his phonograph invention could not have predicted how recorded sound would embed itself into modern life, transforming the once-fleeting novelty of a live performance to one which was repeatable on demand. Recorded sound aided the diffusion of regional styles to a much wider audience and provided an inspiration archive for future musicians, as shown by the critical role of ‘20s blues recordings in the later development of jazz and rock ’n’ roll.

The acoustic era of recorded sound ran from the invention of the phonograph in 1877 until the late 1920s. Edison originally intended for his phonograph to be used as a tool for business, dictating letters or recording phone calls. He created the device with cylinders, first of tin foil and later wax, similar to those used in the telegraph with which he had previously worked. A stylus would scratch away material from the rotating cylinder to record the shape of the waveform. Recording music was an arduous task during the acoustic era. Custom studios were built where the phonograph stood behind a wooden partition, while drapes on the walls absorbed reverberation and musicians crowded around the recording horn. Most found recording difficult and uncomfortable, without the dense acoustics of their usual performance hall and with instructions to ‘play without emotion’. Brass instruments such as the trumpet and tuba were most ideal to record, while the softer piano and violin were lost in a dull, tinny sound.

Today’s familiar disc format came from inventor Emile Berliner who created a much more hard-wearing product from shellac and slate dust, later to become the 78-rpm disc. While more durable, there was a lot of unwanted noise from the wearing away of the disc surface and a record lasted only around 75-125 plays. Vinyl resin, now called PVC, was introduced in the 1930s, originally intended for use in appliances such as radio cabinets or telephones. The vinyl sounded much clearer, vastly improved the signal-to-noise ratio and allowed the use of ‘microgrooves’, three times smaller than on the shellac disc. This type of disc evolved to become the 33 ⅓-rpm LP and was announced to the public in 1948.

The electric microphone and loudspeakers in the 20s and 30s provided a great amount of freedom. Volume and tone could now be controlled, larger ensembles could be captured, and previously hidden instruments such as drums and violins were more present. Engineers Keller and Blumlein developed the 45/45 cutting system which allowed for hi-fidelity stereo recording, while wartime research by engineer Arthur Haddy led to the creation of Full Frequency Range Recording (FFRR) covering an impressive 80Hz – 15kHZ.

This period of hi-fi vinyl was to last until the 70s when magnetic tape began to take over, swiftly followed in 1982 by the digital era of the CD.

The process of making a vinyl record is now more or less the same as it was back in the 60s and 70s, barre some improvements in machinery. Once a disk has been cut, it is sent to the factory for mass-production with a stamper disc. The cut disc, known as the master disc, consists of an aluminium base coated in nitro-cellulose which holds the grooves. The disc is sprayed with silver, submerged in a bath of nickel and electroplated. With the nickel now filling the grooves, the master is peeled apart to create two discs. One now has ridges instead of grooves and is known as the ‘father’ which will be used for stamping. The father then goes back in the nickel bath once more to create the mirror image ‘mother’ disc which can be played back to check for errors. 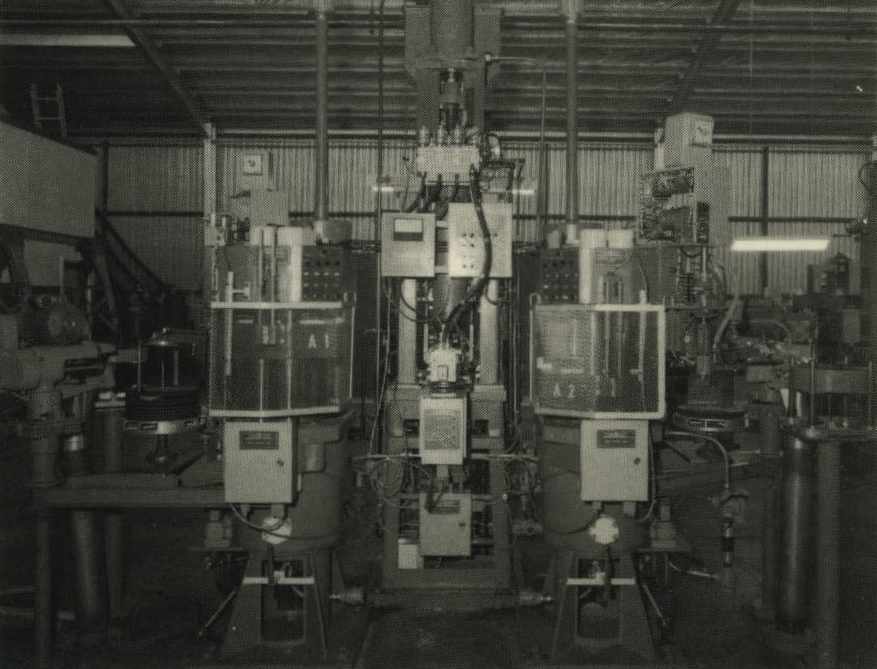 With the stamper ready, the records can now be pressed. The stamper can be used for approximately a thousand records before it begins to wear out. In which case, the mother can be used to make a new one. The vinyl itself starts as pellets of polyvinyl chloride (PVC) which is melted and pressed against the stamper to flatten it and create the grooves. The edges are then trimmed and it is cooled in water ready to be packed and shipped.

Mastering engineers Geoff Pesche and Miles Showell talk us through their process of cutting a record at Abbey Road Studios.

They both highlight a distinct difference with modern-day vinyl – it comes from a digital file. Showell likes to create two separate masters:

“I’ll try and do two different recordings onto the workstation, one of which will have digital peak limiting for a digital source to make it ‘loud’ and another one with no limiting whatsoever for the cut, and that’s the one I’ll use for the vinyl master.”

Pesche, on the other hand, prefers to use the same master for both digital and vinyl, though still cutting the vinyl last.

“These days when you first start cutting a record from scratch you’re generally working from a digital file, because tapes are around but they’re not as popular as they were. So, I’ll create the digital files first so you’ve got your files for digital download ready to go, and generally because I tend not to crush the music I can cut the record parts from that. But, I will generally do the record last because there’s more to go wrong.”

Showell likens cutting a record to a magician spinning plates in a stage show, balancing and moving everything just enough for it to work. He explains the importance of looking out for loudness, vocal sibilance and wide bass which can cause distortion amongst other issues.

“In terms of mixing records so that you can cut them for vinyl, I think there’s certain things you really want to avoid. You want to avoid stereo bass. There’s a reason why all these old classic records have the bass in the middle, it’s because the cutting stylus will try to cut in four directions at the same time if you’ve got stereo bass. You’ve got this groove and that groove and the lateral thing as well for the frequencies, so all of that in stereo just goes round and round and round, and if you’re trying to cut big bass excursions, and it’s loud, and its stereo, it just gives up.”

“I would suggest to do everything cleanly, not too loud, try and get your phase straight if you can. First timers, watch it. Ultra-sonic and low sub-sonic, cutting heads do not like that extreme of frequencies. It has to be linear.”

They both use the Neumann VMS 80 lathe, the most recent model despite first being produced in the 80s. It features a very hi-tech groove spacing computer which uses memory of the audio to more efficiently space grooves. It also has a lot of failsafe features which prevent accidental breakage, which could otherwise be a very expensive fix.

The master disc is much softer than the finished record, allowing the heated stylus to easily cut into it. 600 watts of energy are fed through a coil which vibrates the stylus to record the music. A suction mechanism keeps the disc flat while removing any shedded material into a separate container. The disk is actually 14 inches, larger than the finished 12-inch, which allows room for a test cut on the outer edge. Inside of this edge there is space for roughly 20 minutes of music, so volume, bass and stereo width all need to be taken into consideration as they take up the most room. Showell comments on groove spacing:

“They can basically just about kiss, but if theres any overlap at the very slight edge it will play fine but you’ll get a click, so I don’t like that. Some of the highest quality plants will just reject it if they’re kissing so I like have it as close as possible but not actually overlapping. If they overlap in an extreme sense then you’ll get a jump, it’ll skip.” 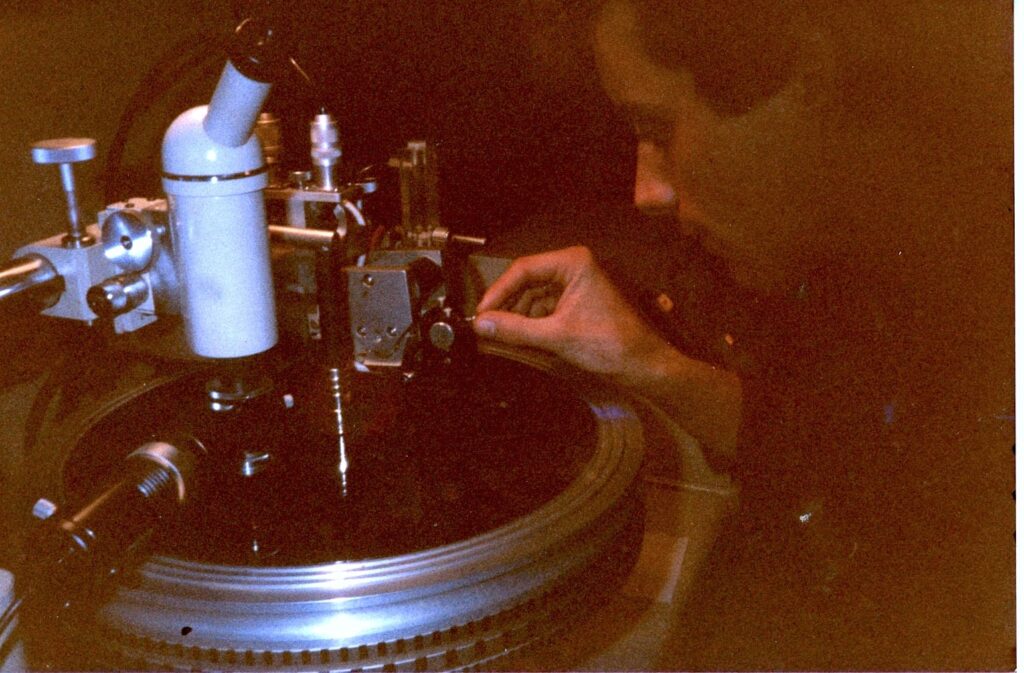 Studios 301 Senior Mastering Engineer, Steve Smart, took us back to his days as a vinyl cutting engineer, giving us an insight into the day-to-day process of cutting vinyl.

“When the engineer finished mixing, either they or the assistant would put together the many different takes of the mixes onto two reels of tape – for side 1 and side 2 of the LP. They put the gaps the way they wanted them, but there would be discrepancies between the individual tracks – the volume level and the individual sound/tone – which affected the continuity of the album. And that’s where the first mastering engineer truly was a master engineer. He would get the master tape, play the reel through, make some notes, set-up some equalisers and compressors for each individual track and then, with those settings in mind, and in real time, transfer or cut that tape on to a disc by means of a cutting lathe.”

However, not everything can be replicated on vinyl exactly the way it sounds digitally. Steve explains,

“Always have in mind what you can and what you can’t get away with. Specifically if you’re going to do it for vinyl, you have to seriously keep in mind the restrictions that the music will be placed on through the process of being physically cut to vinyl. So you know, stereo bass lines are not gonna cut it. If you’re doing dance music, you can’t have that hi-hat as loud as that kick drum. It’s just not mechanically or technically possible to be able to get away with that on vinyl.”

To read more about Steve’s process and history with vinyl, you can read his three part series on Mastering for Vinyl here: https://studios301.com/from-the-desk-of-steve-smart-mastering-for-vinyl-part-1/

Though still dwarfed by digital streaming, physical sales of CD, cassette and vinyl are steadily increasing their impact. The lush analogue sound of the vinyl combined with the theatrical ritual of playing a record makes it popular with audiophiles, retro enthusiasts and mainstream pop fans alike. Looking back on the history of recorded sound can easily fill us with a new appreciation for the ease of access we have to any kind of music today, whether in physical or digital format.