Alex Mraz graduated in early 2018 and is moving swiftly from jobs in record stores to live events – probably some that you’ve been to. Maybe you saw her shadowing Front of House in Rod Laver Arena, or she sold you a record at Basement Discs in the CBD. Either way, she’s a name you should get familiar with, because she’s sticking around and helping evolve the live music scene in Melbourne. She has a genuine care behind every gig she runs and is currently being mentored as a live sound engineer with the incredible team from The Push. If you’re looking for an engineer to run your show or tour get in touch. 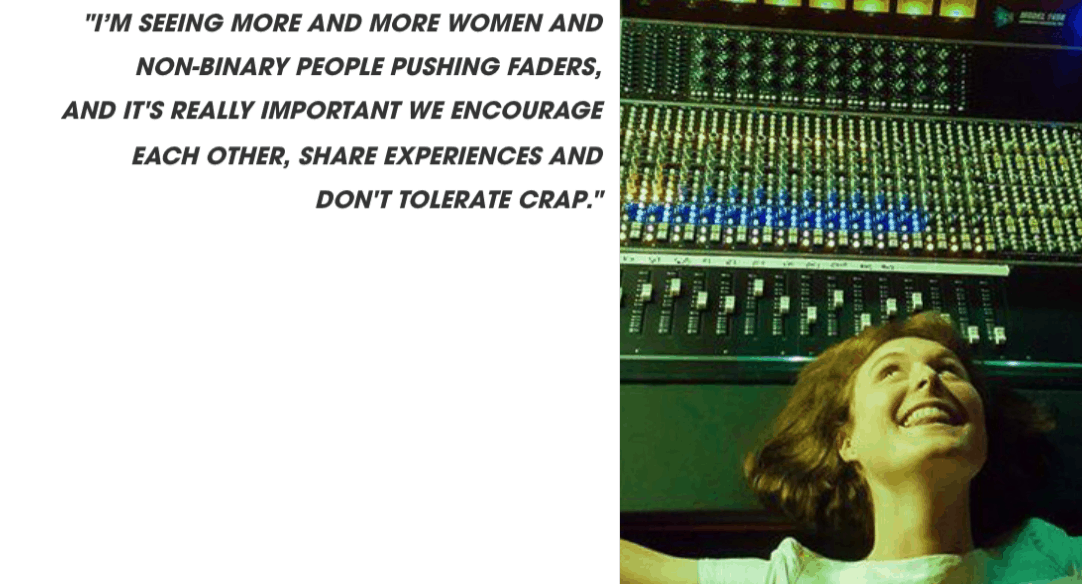 Alex: I’m doing gigs maybe three nights a week at the moment so it’s generally on the weekends. I’m working at a record store – basement discs 3 days a week, so I have full-time work between the two of them. But I really am wanting to focus on my mixing.

Eileen: So you’re doing live sound and that’s what you want to keep advancing in. What are you doing most of the time at the gigs, are you tech-ing, FOH/Monitors or running the show?

Alex: Because I’m still in small to medium-sized venues you do have to do everything. You have to keep everything on time, set up the stage, get input lists in advance. More like managing people. I do joke that it’s like hospitality but with a lot more technical steps because there’s so much in the way of people skills involved. Different people to look after as well and liaising between venues and artists, and the audience.

Eileen: Do you feel like you have much more of a broad knowledge? You are basically doing the work of an entire crew.

Alex: Yeah, absolutely. It’s definitely valuable to have an overview of all the things that have to come together to put on a show.

Eileen: Do you have a real passion for these live events and shows? Do you think you’ll be setting up these kinds of events from scratch in the future?

Alex: I never really I’ve never really thought of myself as being an event manager, but I don’t see why not. I’ve definitely got a passion for the pace and the immediacy of live sound – it’s very vibrant. It sounds kind of corny but there’s a vibe you know. It’s exciting. It’s loud.

Eileen: How far in advance are you booked out?

Alex: It’s usually the next three weeks to a month. That’s the timeframe when artists are going ‘Oh crap we need a sound for this’. Occasionally people are really organised and they book you like four months in advance and you’re like “great!”. And then also sometimes you get a call being like “emergency! Someone needs a soundie tonight. Can anyone help?” Again it’s haphazard.

Eileen: What’s the most important thing you’ve learned so far?

Alex: Keeping calm when things are going wrong and troubleshooting. Everything can be imploding and doors are open and you know what I mean. You don’t know how to fix X, Y or Z but just thinking about signal flow, managing the situation. Fixing stuff.

Eileen: It’s such an intense line of work. If someone reading this has worked in live sound before they’ll know how on edge you can be.

Alex: Yeah totally! And it affects your ears as well. Honestly, when I’m stressed I can’t hear – I can’t sit back and evaluate the mix because you just get tunnel vision but for ears – I don’t know if that makes sense. Yeah keeping calm is hard. There is so much going on. People say “it’s a dark art – sound engineering.” and if you’re doing your job perfectly no one should even notice that you’re doing your job. You are just this invisible force, it’s weird.

Graduation and THE STARTUP PERIOD

Eileen: Awesome. So when you first left Abbey Road Institute were you already doing live sound/events?

Alex: I’d done a couple of gigs towards the end of my diploma. Fairly simple ones. It was kind of a weird transition of getting out of my old job and into live sound because a lot of the hours were the same. So I had to navigate that and hustle and keep myself financially afloat as I did it.

Eileen: That transition is tough. How long do you reckon it took you before you realised you had to bite the bullet and live on a tight budget for a little while getting this new work off the ground?

Eileen: What was your biggest challenge during the startup period?

Alex: Taking myself seriously. When people ask me what do you do saying “I’m a sound engineer” not saying “I work in hospitality and I am starting to mix gigs”. It was really hard, you have to force yourself to say it.

Eileen: What did you learn here at Abbey Road Institute that helped you get started on this journey?

Alex: I would say that the business unit at the end of the course. It was just really helpful in knowing how to set up a freelance structure. Knowing things about invoicing and tax and even having hard words with a couple of the staff about “you should be charging more”. Yeah those kinds of skills which were really confronting to actually have to be like ‘Oh no one’s employing me anymore I have to look after this myself’. So yeah that was really good.

Eileen: Which skills have been most important so far in your career?

Alex: Technical skills. Sound engineering skills and the physics and science [behind sound]. Exactly what they said at school. Signal flow, signal flow, signal flow. And ear training. Practising your frequencies, healthy gain staging and signal flow because that just helps you troubleshoot. [Live sound] can get complicated pretty quickly. Also, it’s important the way that you engage with people. Being really helpful and approachable and making everything smooth for the artists.

Being in hospitality for such a long time gave me these skills and people are always like “you’re really nice to work with”. And I didn’t ever think that I was really going above and beyond at all. But I guess people have had bad experiences with sound engineers. So that was a point of difference for me just being nice.

Just checking in with people. Friendly e-mails. Being approachable. All important.

Eileen: Do you think with the new generation coming through the ranks that the old fashioned perception of ‘the sound guy’ will disappear?

Alex: Yeah. I hope so. It’s hard to have a definitive perspective on it because I’m pretty young but it seems to be changing, which is great.

WHAT THE FUTURE HOLDS

Eileen: What are your next steps?

Alex: I just want to get better. I just want my ears to get better. I know how far I’ve come but there’s still so so far to go. Also, I got accepted into a mentorship with The Push just recently which is really exciting so I’m gonna have a mentor for the next six months or so. My next goal is to make this my full-time gig and I’m hoping that that mentorship will propel me towards that. And more business skills just a more sort of streamlined workflow. Because everything’s a bit haphazard when you start out freelancing.

It’s actually been really nice in the last few months that I’m getting calls and messages from people being like ‘Hey, you mixed my friend at this gig. They were really really happy. Can we get you on?’ Or even people coming up to me at gigs and saying ‘Hey sounds great. Can I have your number just in case?’ That’s what I go home and like quietly fist pump.

Eileen: Do you feel like your goals have changed? Have you surprised yourself with how much you’ve changed in the last year since you graduated?

Alex: Even when I was at school I was hell-bent on doing studio work. And yeah, I’ve surprised myself by being like ‘Oh no, actually live [sound is] where I want to be. At the time it was just out of necessity because that was where I was able to get employment. I couldn’t afford at the time to work for free [in a studio] and sweep floors and get coffee for six months before maybe getting invited to assist on something. So, it’s worked out really well.

Eileen:  Do you have any plans to go on tour with a band?

Alex: There is a band I’ve been [working with] doing sound and they are really keen to put a lot of energy into their project and have me come on tour with them, which I probably can’t talk about. I would love to do that! I think just more of a bucket list thing. I’m quite introverted I don’t know how I would do sharing a very small space with a bunch of people for a long time.

Eileen: That’s part of the tour that I forget about – getting to different venues and sound systems every day. Sitting in a van for 10 hours etc.

Alex: Yeah. Oh yeah. Quite apart from that. The job’s stressful enough even when it’s a venue you’ve been doing sound in a dozen times. But a venue with unfamiliar gear.

Eileen: Where can you see changes in the future of the industry?

Alex: I’m definitely all about making gigs more accessible and safe. There’s a bunch of organizations that are doing awesome stuff for diversity and accessibility. So that’s another goal. Also bringing awareness to artists about things that will shape the future of the industry. Like adding an acknowledgement of country to your facebook event, or implementing anti-oppressive behaviour standards that you might have for your shows. Raising the bar that little bit higher for every show.

Eileen: Well, I can see you killing it based on what you’ve been doing in the last year – the world is your oyster. Thanks Alex.

Alex: Thank you. That means a lot.

Our alumni have been working and creating through many diverse industry pathways. These roles include work at Studios 301, freelance work, live events, post-production and more – it’s something we want to share with you.

Check out the Alumni section of our website where you can learn more about our homegrown and global alumni who are contributing to the future of the music industry and carving their own way with confidence.